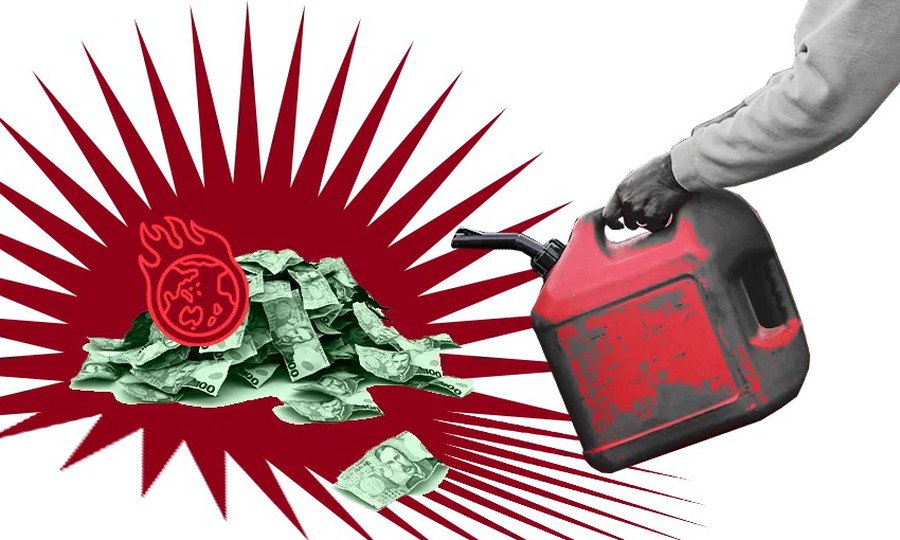 The original article featured on The Spin Off, you can find it here.

Oil companies are so large and remote it can seem there’s nothing individual New Zealanders can do to make their voices heard. But all of us have the choice not to invest in fossil fuels.

Cop26, the international climate summit in Glasgow, didn’t provide the much-needed pathway for avoiding climate chaos, but it clearly signalled the end of an era for economies historically powered by cheap fossil fuels. The Cop26 final declaration was bitterly opposed by oil-producing companies and governments, and was watered down in the final hours, but it was agreed that governments will phase down coal power and phase out most forms of fossil fuel subsidies. This is the first time that governments have collectively made these commitments or even talked about reducing fossil fuels in a climate agreement.

The Cop26 agreement follows a pronouncement from the International Energy Agency earlier this year that the world already has enough fossil fuels. More coal, oil and gas discoveries and new fields are not required. Decline is inevitable. As Ahmed Zaki Yamani, Saudi Arabia’s oil minister, commented: ”The stone age didn’t end for lack of stone, and the oil age will end long before the world runs out of oil.”

As a result of agreements at Cop26, we’ll likely see increased regulatory pressure, higher carbon prices and a reduction in subsidies. The fossil fuel companies already face competitive pressures from renewable energy as costs for solar, wind and energy storage continue to fall.

There may be a period of price increases as producers try to squeeze out profits from declining sales, but this will only speed up their loss of market share to clean energy. The major institutional investors, who own most of the shares of the largest fossil fuel companies, are seeing the writing on the wall.

Warnings over climate risks associated with fossil fuels are not new. International leaders like Mark Carney, former governor of the Bank of England, have repeatedly sounded the alarm over fossil fuel reserves and fixed assets becoming “stranded assets”, unable to be used due to climate change.

Research institute Carbon Tracker has estimated the book value of fossil fuel infrastructure that could be written off at over US$20 trillion. It’s little wonder the Reserve Bank and other central banks are concerned about the impacts for financial stability. Climate risks are not new, but their scale and extent are still being revealed.

Understandably, those investing in fossil fuel companies are nervous. Increasingly hostile investors are putting pressure on fossil fuel companies through their governance, as dramatically shown in the case of Exxon. Three of that company’s directors were replaced by advocates for a far faster climate transition after major institutional investors lined up behind a small hedge fund, Engine No. 1.

While this pressure is helpful, change has so far been glacial. Despite years of investor pressure, the major companies are still spending almost all of their capital costs on new or expanded oil and gas fields. Analysis by the Carbon Disclosure Project in 2018 showed that the major oil companies were spending only 1–4% of their capital investment on low-carbon energy sources.

The major companies are unwilling and, in many cases, unable to change their business model to become a major player in clean energy. Few have made the transition – the former Danish oil company Ørsted has become the world largest offshore wind producer, and perhaps Genesis Energy could do so if they divest from Kupe and fully implement their climate strategy, but there are few other examples.

They are about to be joined by many others. By the time Cop26 started, there were pledges of US$130 trillion to reduce emissions in investment portfolios to zero. This represents more than 40% of global financial assets under management, a staggering amount of capital.

The rules for net zero pledges do not strictly require divestment from fossil fuel companies, but it is a first step taken by most funds that are serious about meeting their commitments. There will be close scrutiny over the fossil fuel investments of the funds making net zero pledges to hold them to account.

The combination of investor pressure and divestment has significantly lowered the market valuations of fossil fuel companies. Most fossil fuel companies have been terrible investments. Over the past ten years the Dow Jones Oil and Gas Index has dropped by an average of 2.3% per year whereas the S&P 500 (an index of major US listed companies) has risen by 14% per year.

The effect of these trends was seen when the New Zealand Super Fund analysed their sell off of fossil fuel producers and owners of reserves. Their returns were $800m higher than they would have been if they had retained their fossil fuel investments.

The silver lining for financial and energy markets is the huge opportunity for investment in clean energy and an array of associated businesses. As seen by rapid inflows of capital into companies such as Meridian and Contact Energy, clean energy investors are bidding up share prices and lowering the cost of capital, a trend shown in analysis by MSCI.

The Oxford University Institute for New Economic Thinking has documented the upside – a rapid green energy transition will likely result in overall net savings of many trillions of dollars, even without accounting for climate damages or co-benefits of climate policy.

The role of investors in this transition period will be crucial. Investment providers are meant to manage risks and seek high returns; it is difficult to see how this is being achieved through continuing investment in fossil fuel companies, especially as they seek to reduce the level of emissions in their investment portfolios.

The most likely future is accelerated divestment from fossil fuels, unless there is evidence that their continued investment in a specific company is contributing to a rapid transition from fossil fuels to clean energy.

At Cop26, New Zealand signed up to agreements to get rid of coal and oil and gas development. Our government has work to do in order to honour the commitments it has made.

Firstly, the coal agreement undertook to end power generation from coal and support for new coal developments. The government faces a challenge in reforming the electricity market to phase out the use of coal at Huntly power station, largely responsible for the increase in our emissions this year. There are also two permits under consideration for the development of new coal mines in Southland and on the West Coast of the South Island.

The power of citizens and markets

New Zealanders should not wait for the government to take the lead. There are already a wide range of actions that individuals can take to reduce their climate footprint. In terms of carbon emissions, each individual emits 7.7 tonnes per person of carbon dioxide equivalent, primarily through our transport choices, electricity use, waste and the food we eat. Tools such as FutureFit can make it easy to track your emissions and reduce them.

However, there is an important step that few New Zealanders take. A typical KiwiSaver fund that is invested globally invests in companies that emit 3.4 tonnes per person of carbon dioxide equivalent. This is a significant additional footprint that is rarely counted. A first step to reducing these emissions is to stop investing in fossil fuel companies.

The fossil fuel holdings of KiwiSaver funds include 161 funds with $375 million invested in companies mining, processing and transporting coal. This is of particular concern given the high financial risks of coal investments and the damaging impacts for emissions and human health.

Investment providers are meant to manage risk and seek high returns. It is difficult to see how this is being achieved through continuing to invest in coal and other fossil fuel companies that face massive risks and have a track record of negative returns.

In recent years, there has been a significant increase in the number of fund providers that have a policy of avoiding fossil fuel investments. This has grown hugely from 2% of KiwiSaver funds to 19% over the past two years, but most of New Zealanders’ funds are still invested in portfolios that include fossil fuel companies. It’s time to kiss fossil fuels goodbye.

The author is the founder of Mindful Money, a charity that provides radical transparency for New Zealanders about the companies that are in their KiwiSaver and investment funds. The online service is a quick, easy and free way to find out what is in your fund and to see what fossil free funds are available.